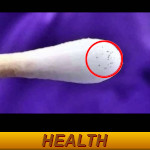 Not only tests and vaccines. The whole system for depopulation and enslavement.

You will not catch the virus, you will have it if a cell in your body is poisoned!

This site uses Akismet to reduce spam. Learn how your comment data is processed.